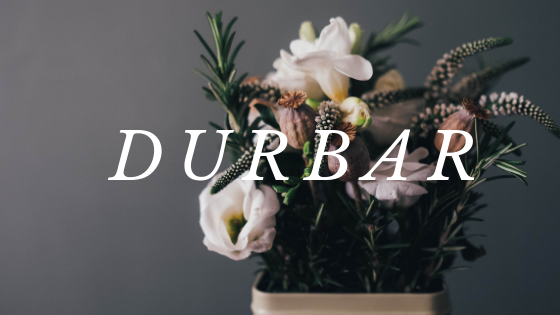 The thing with words is that sometimes, a word isn’t just a word, especially when you have come to attribute it to a person. More radical is the transcendence when said person is one that owns a home in your heart. The word becomes many things; a scent smelling strongly of human, a roomful of emotions, a house accommodating people and places. I have come to see that the only way for the existence of a medium where moments and memories cohabit seamlessly, is where the medium is a word you have come to attribute to a beloved. And so the word becomes a warehouse of memories and moments so that both cannot be told apart unless you or your beloved dies. And death here often has nothing to do with mortality, just an absence that cannot be corrected. It is what has happened to me with the word,

The word Durbar, in the ordinary sense, would bring to mind a picture of colorfully and traditionally dressed men on horses, blowing trumpets in a way that for some reason always makes me think of religious fanatics even though culture and religion are two different things, and shooting local guns into the evening sky.

In this picture, there would be clowns on foot accompanying the men on horses; there would be men and women and children. Circling, bending, swaying, weaving themselves into one another and out again, mindless yet assured, and seemingly effortless like smoke, to the delight and great admiration of the audience.
Some dressed ridiculously, others artfully, and some others dangling on the thin line between what is ridiculous and what is art. There would be the last group too, whose choice of clothing would make you wonder whether there is no such line that is universally accepted, that is only a construct of the individual minds of people according to the various degrees of their tenderness. There would be singing, and there would be the emir passing after much of these people have displayed enough to herald his arrival.
He would be on a horse, the emir. Decorated uniquely under a large, dancing royal umbrella, smiling to the people who have gathered to watch, raising a fist in respect to all, and on some occasions throwing kola nut into the crowd. There would be only smiles and excitement and laughter.

But for me, for my family, Durbar is, was, all these doubtless but much more, too. Durbar was first, the spending of the third day of Eid-el Kabir at Ma’s house every year. Durbar was a short journey with my parents and siblings in the car from our home to Ma’s. It was food and drinks, and laughter and so much gossip passed between my sisters, myself, and Ma’s children. It was spending time with Ma. It was reminiscence, happy reminiscence. It was the weaving of memories into time, like the exercise of knitting to one who loves knitting. It was all of us; children, parents, including Ma herself leaving the house at 4 pm afterward to watch the Durbar that exists on an average day to other people. Durbar was Ma’s home and her children on the third day of Eid el Kabir. Durbar was Ma.

And so the first Eid-el Kabir after Ma dies, after that death alters the smiles and lives of all the people in her home forever, nobody in my house would make a mention of Durbar. And when my younger sister summons the courage to ask if I’d go with her as she cannot bring herself to go alone, I’d shake my head no.

Because for me, there is only one Durbar, and she has died.

Hauwa Shaffii Nuhu is a writer whose work has appeared online and in print on platforms such as After The Pause journal, Ake Review, The Kalahari Review, The Bitter Oleander, Brittle Paper, Afridiaspora and elsewhere.

She is currently pursuing a law degree, is in her final year and a blog intern for That Green Tea. She writes from Nigeria.

This site uses Akismet to reduce spam. Learn how your comment data is processed.